Hello and welcome to the Fred’s Bughouse. Today’s bug du jour is a little guy commonly known as the blister beetle. In this post we’ll talk about the blister beetle’s strange life cycle, the chemical weapon that it unleashes on its attackers, and its connection to the adult film industry. If you have ever said to yourself, “I wonder if there’s a such a thing as a beetle that eats bees, kills horses, and gives you a destructive, painful hard-on,” then you’ll be right at home today in Fred’s Bughouse.

Fred's Bughouse is conceived, written, and foisted upon the unsuspecting public by Frederick Cushman Mosher, MA, BA, etc etc. For more of my insect-obsessed efforts, check me out on Instagram, Facebook, and Owlcation.com.

While you're at it, why not join my mailing list and get alerts when I publish a new blog post. There are some real doozies coming up!

There are almost 2,000 different species of blister beetle, all in the family Meloidae. Beetles, like butterflies and moths, undergo complete metamorphosis, which is to say they have several phases of development: egg, larva, pupa, and adult. While butterflies and moths are the ones we typically think of as undergoing this process, lots of other insects do it too, including flies, bees, dragonflies, and many more. Complete metamorphosis is mind-blowing in its own right, but the blister beetle has come up with its own spin. It’s a little complicated, so bear with me as I break it down:

1. The beetle begins life as an egg, laid on a plant or under a rock by the mama beetle. So far so good.

2. The egg hatches, and what comes out is a scurrying, rapacious little nightmare called a “triungulin.” It’s a stage of development unique to blister beetles and their close relatives -- no other insect known to science has this unique phase. The triungulin is a tiny, ant-like thing that runs on long legs and is a parasite-slash-predator on honeybees, or in some cases grasshoppers.

3. The triungulin runs around on flowering plants "like a shrew on amphetamines," in the words of Harvard entomologist Piotr Naskrecki. Some species emit pheromones that mimic the mating call of solitary bees, and when the lonely bachelor shows up expecting a lovely lady bee, it gets a serious case of the triungulins.  The little beasts sink in their claws and hitch a ride back to the nest. Here’s a what an attack looks like:

4. Once in the nest, the triungulin drops off the bee, crawls into one of the cells of the honeycomb and sheds its skin. When this happens, the skin on the back of the leggy, spiny triungulin splits open and out comes… a legless grub-maggot. No more triungulin, ever again. It is now a featureless white blob with a mouth at one end and a butt at the other.

5A. It gets really cold, or really hot. In this case the grub-maggot sheds its skin again and becomes a hard brown “pseudopupa.” It has no mouth so it can’t eat (which is just as well since it also has no butt so it can't poop). This optional, environmentally-triggered pseudopupa stage is vanishingly rare among insects. Added to the triungulin stage, it makes the development of the blister beetle among the most complex of any organism on the planet.

Inside the hard shell of the pseudopupa the insect's muscles break down. It also basically stops breathing. It can stay like this for up to a year, or whenever conditions improve, at which point...

5B. The muscles and other structures magically reform inside the hard pseudopupa shell, and it splits open and out comes... a legless grub-maggot!

5C. Remember, all of this only happens if it gets really cold or hot. It might not happen at all.

6. Whether or not conditions lead it to enter stages 5A through 5C, the grub-maggot keeps eating until it’s about the size of an adult bee. Then it forms a pupa – a real one – and inside it reshapes into the adult beetle form.

7. The pupa breaks open and the beetle crawls out of the bee nest -- why they don't all crowd around and sting it to death at this point is a mystery -- and flies off to find another beetle to mate with. The fertilized female lays eggs and the process repeats.

Confused? Me too. Here’s a graphic that probably won’t help: 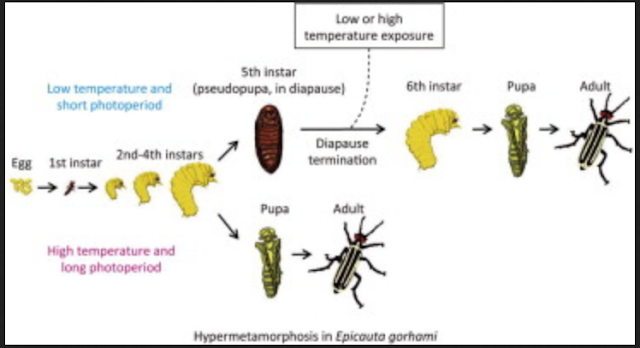 This process is called “hypermetamorphosis,” and it is unique to this group. If hypermetamorphosis were the only thing that sets the blister beetle apart from everyone else, it would be remarkable.

But it’s not. There’s more. Much more. And we will get into it in the second half of "In the Bughouse: Blister Beetles."